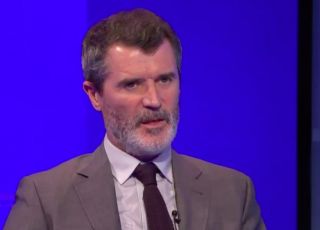 Roy Keane and Jimmy Floyd Hasselbaink disagreed about whether Scott McTominay should have been offered the opportunity to score a rare hat-trick for Manchester United against Leeds.

United ran riot against their old enemy and Bruno Fernandes netted a penalty to make it six at Old Trafford.

It’s the first time United have scored six in the league since the 8-2 thrashing over Arsenal in August 2011.

Fernandes nonchalantly slotted in his 14th goal of the campaign, but former Chelsea striker Hasselbaink would have loved to see McTominay step up to complete his treble.

He was unquestionably man-of-the-match and some suggested Fernandes could have stepped aside from spot-kick duties with the game already a procession.

But Keane, in typical style, told Hasselbaink to ‘relax’ and suggested he could have missed.

McTominay was the best player on the pitch and won’t be too concerned that he wasn’t able to complete his first professional hat-trick.

Alongside Fred in a double midfield pivot, he was instrumental in driving United to third place in the league with an emphatic victory.

Listen to the debate below. Footage courtesy of Sky Sports:

Jimmy 🗣 "I would've loved to see that"