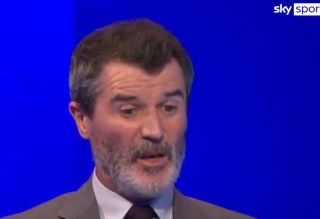 Manchester United are being spoken about as Premier League title contenders after beating Leeds United 6-2 at Old Trafford.

The win moves United up to third in the Premier League standings — and with a game in hand, we’re just 5 points behind league leaders Liverpool, who were crowned champions last season.

Roy Keane believes Liverpool are still the strongest side in the league, which is probably a fair assessment, but he acknowledges the work being done at Manchester United under Ole Gunnar Solskjaer.

Speaking on Sky Sports after the match, Keane said: “Liverpool are the strongest but Man United can be best of the rest…”

Keane thought it was a good game but United took advantage of the space Leeds were willing to leave all over the pitch.

The Irishman thinks the United players should be looking at the league table.

Jimmy Floyd Hasselbaink disagreed that United are the best of the rest.