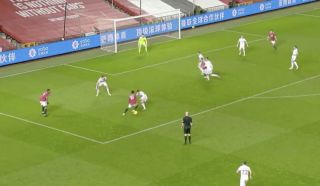 Manchester United attacker Marcus Rashford was in full swing when the Reds hosted rivals Leeds United in the Premier League on Sunday afternoon.

Rashford, 23, posed a threat to Marcelo Bielsa’s back-line all afternoon and despite being unable to get on the scoresheet himself, the English forward showcased some moments of brilliance.

With 20-minutes to go, Ole Gunnar Solskjaer saw his side win a spot-kick which Bruno Fernandes cooly dispatched.

However, in the build-up to United’s clear penalty, Rashford showcased some irresistible intricate skill inside his opponent’s box.