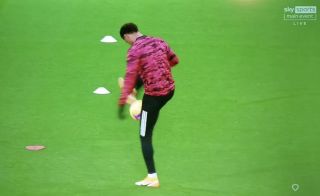 Manchester United forward Marcus Rashford has appeared to be in relaxed spirits ahead of his side’s exciting Premier League clash against rivals Leeds United on Sunday afternoon.

The Reds currently sit eight-points off top spot but do have two important games in-hand and know they’ll need to accumlate as many wins as possible if they’re to run Liverpool close.

Whilst warming-up for the tense affair, United’s 23-year-old was spotted showing-off some silky ’round-the-world’ tricks.