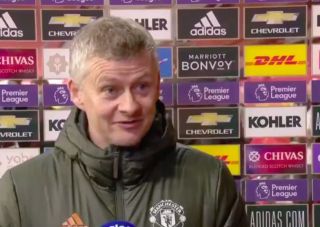 Ole Gunnar Solskjaer says Manchester United’s enthralling victory over Leeds could have ended in a ’12-4′ scoreline.

The Reds were rampant at Old Trafford, scoring six goals in the league for the first time since their 8-2 victory over Arsenal in 2011.

United had 26 shots on Leeds’ goal and could have doubled their tally had they been more clinical and ruthless.

But ultimately, Solskjaer will be thrilled after getting every key decision right against Marcelo’s Bielsa’s men.

The 6-2 scoreline didn’t tell the whole story either, with ceaseless Leeds unfortunate not to score four or five of their own after missing countless chances.

Anyhow, United rise to third in the league and Solskjaer understandably enjoyed one of the most watchable games in recent memory.

Listen to Solskjaer post-match below, via Sky Sports: