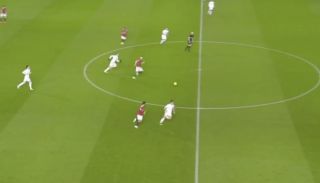 Two early goals inside the first three-minutes from midfielder Scott McTominay set the tone for the remainder of the first 45-minutes.

During the first-half a clip has emerged which shows how a simple flick from Fernandes in the centre of the park carved Leeds United wide-open, not once, but twice

Both occasions led to clear-cut United chances with one for Marcus Rashford and the other being Fernandes’ goal.