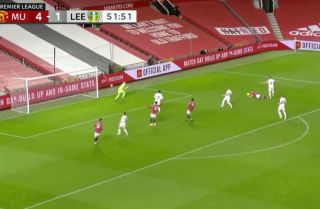 Daniel James was booked for diving, but highlights show it wasn’t a dive at all…

More awful refereeing in the Premier League as Daniel James saw a yellow card after going down inside the Leeds United penalty area.

The Wales international got the nod in today’s starting line-up and has been trying to make an impact on the game.

United lead 4-1 since half-time, but it doesn’t look like the Red Devils are finished just yet.

Daniel James went on a brilliant run through the pitch only be pushed off the ball as he entered the box.

While it would have been a soft penalty to give, it was an absurd call to book James.

Watch below, courtesy of NBC Sports: