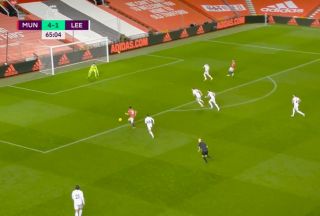 Manchester United have five against Leeds United and there won’t be a more popular goalscorer at Old Trafford.

Daniel James has completely justified his surprising selection against the side he almost joined and has deservedly got in on the act in a memorable United rout against their old rivals.

The Welshman hasn’t started a game since October 24 but has done his job brilliantly this evening and netted after some super play from man-of-the-match Scott McTominay.

McTominay started United’s onslaught with two goals in the first three minutes and excellently picked out James after a driving run in midfield.

James took the ball in his stride before hitting a left-foot shot through the goalkeeper’s legs.

EDIT: Bruno Fernandes has scored a penalty to make it SIX for United at Old Trafford with 20 minutes to play.

Stuart Dallas then netted a Leeds consolation from range in a game that continues to amaze.