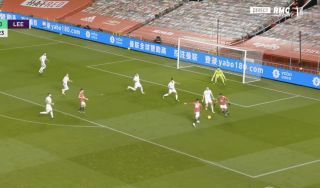 It’s all going down at Old Trafford on Sunday afternoon!

Manchester United midfielder Bruno Fernandes has smashed his side into a 3-0 lead after just 20-minutes in their exciting Premier League match against bitter rivals Leeds United.

Ole Gunnar Solskjaer has been watching on as his youthful and exciting Red Devils put on a first-half attacking master-piece against Marcelo Bielsa’s Whites.

Two goals inside the opening three-minutes from Scott McTominay more or less set the tone for how the next 20 were going to go.

What a game. What a first-half performance.

Bruno Fernandes makes it three and the Red Devils are rampant! pic.twitter.com/b48Rv9VYWd