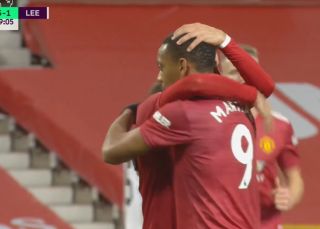 Another penalty for Bruno Fernandes, another goal for Manchester United.

Bruno Fernandes has scored his second goal of the game against Leeds United with a penalty spot.

The Portuguese international stood up to make it 6-1 as he sent the ball down the right with a hop, skip and jump technique.

This is turning out to be a sobering day for Leeds, but it’s just a huge shame none of their fans are at Old Trafford to see it.

Anthony Martial won the penalty after being fouled inside the box.

Watch the goal below at 2.16, courtesy of Sky Sports:

The same goes for Manchester United fans. How we’d love to be in the Stretford End this evening roaring on the lads.

Anyhow, three points in the back now. It’s become a matter of improving goal difference now.

Update: Leeds have scored another to make the scoreline 6-1.