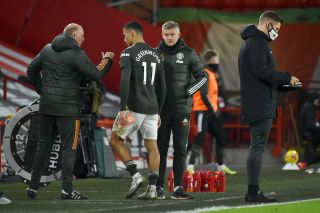 After a slow start to the season, and getting knocked out of the Champions League group stages, the Reds appear to be getting back on track in the Premier League at least.

The fact we’re still very inconsistent makes it difficult to remain optimistic before the third game comes on a winning run because we rarely win 4+ on the bounce.

I don’t think it helps that every week there seems to be tactical changes. With this bunch of players, Solskjaer has been more reactionary this term than proactive. There’s no hiding from that and it makes us extra nervy before games.

But Van Gaal also speaks as a man who came in to try and get United back to their best and it didn’t work out in his two years at Old Trafford.

The Dutchman is quoted by the Daily Mirror as laying into Solskjaer for changing tactics too much and questions whether the Norwegian coach has even given his players adequate coaching in so many different systems and formations.

“The football he brings is of a counter attacking team. He always adapts to his opponents,” says Van Gaal. “And he is playing different systems all the time. Against Southampton it is 4-4-2, in the next match it is 5 defenders, next it is 4-2-3-1.

“You could argue he is using the qualities of his players, but at West Ham United they were outclassed in the first half.

“It was only when Marcus Rashford and Bruno Fernandes came on they made the difference.

“Using different systems is okay but my question would be is he actually properly training the players to use these systems?

“Because it’s key that if you switch these different playing systems it must be executed in a good way.

“It depends less on the quality of the players than on the actual practice of a system in training.”

Manchester United play host to Leeds in the Premier League at 4:30pm today.