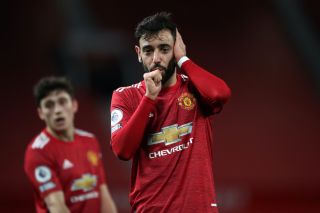 Bruno Fernandes has been a sensational signing for Manchester United this year. In the first-half against Leeds United today, the Portugal international scored one goal and created an assist.

His goal was an absolute cracking and didn’t come from the penalty spot.

What’s more is no midfielder has scored more non-penalty goals than Fernandes (5) in the Premier League this season, as revealed by MUTV presenter Statman Dave via Twitter.

No midfielder has scored more non-penalty goals than Bruno Fernandes (5) in the Premier League this season.

Manchester United look like they could add more goals to their lead against Leeds and I wouldn’t be surprised if Fernandes had more involvement.

The Portuguese star doesn’t give up and has a real hunger for winning.

This win could be massive to United’s season and give the lads a boost as well as some belief that they can mount a title challenge.

There’s a lot of room for improvement but I’ve seen crazy things happen in football.