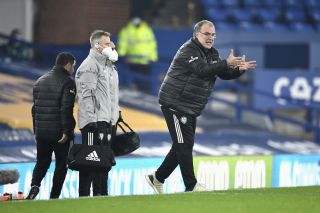 Ole Gunnar Solskjaer has praised Marcelo Bielsa for turning Leeds United into one of the hardest working teams in the Premier League.

The Sheep are the “fittest team” in the top-flight, according to Manchester United manager Solskjaer, who says Bielsa is “a coach with all the details”.

Leeds travel to Old Trafford in the top-flight for the first time in 16 years today, with the Red Devils knowing a win would keep them in contention in the top half of the table.

Bielsa led Leeds to promotion in 2019-20, and his team have made a huge impression since the new season began, playing aggressive but extremely entertaining football.

The Yorkshire club are currently sitting 14th after their opening 13 fixtures of the campaign, and go into today’s game on the back of a 5-2 win over Newcastle on Wednesday.

Solskjaer is wary of the threat Bielsa’s men will pose his team.

“He is doing a great job with Leeds and he’s done a good job with many other teams as well,” Solskjaer told MUTV.

“You see that there’s so much going on and to analyse those games takes a bit of concentration and time. You can see he’s a coach with all the details and he’s got his teams running.

“They’re the highest running and sprinting team in the league, probably the fittest team, so that’s one of the battles that we have to stand up to. It’s going to be a physical game.”

This is one of the biggest rivalries in English football, but with the lack of fans and Leeds being a newly promoted side, surely I’m not the only Red yet to feel that pre-match tension that usually comes with a heated rivalry.

Solskjaer added: “They’ve had I don’t know how many games with over 25 shots and they create chances. They go forward, it’s a good team to watch and as you said the teams are entertaining.

“Then again, for us, this is about three points and standing up top the problems they cause us. You’ve got to solves those problems and give them problems yourself as well.”