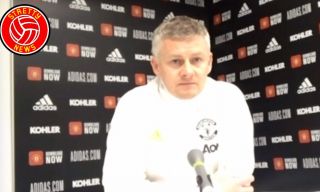 Ole Gunnar Solskjaer was unhappy that Daniel James wasn’t awarded a penalty and instead was perceived as a diver after receiving a yellow card for simulation against Leeds United.

James justified Solskjaer’s surprise decision to select him on the wing with an excellent showing, but was bizarrely shown a yellow card in the second-half.

The Welsh winger skinned Leeds skipper Liam Cooper and the defender flung an arm out to prevent him going through on goal.

And instead of giving what appeared a blatant foul, James was punished for going down too easily right on the edge of the box.

Anyhow, the referee’s decision was ultimately academic as James got on the scoresheet to make it five minutes later for the Reds in fine style.

Solskjaer was thrilled with James’ impact and believes he has a big part to play in the coming games.

He also denied his inclusion had something to do with opponents Leeds trying on multiple occasions to prize him to Elland Road.

Listen to Solskjaer speak out James in his post-match press conference below: