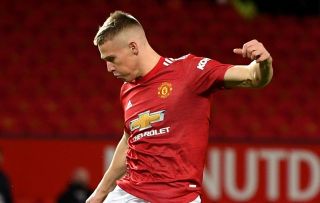 Scott McTominay came off during stoppage with against Leeds United holding his groin.

The Manchester United midfielder became the first player in Premier League history to score a brace inside the first three minutes of a game today, with two stunning quick-fire goals against Marcelo Bielsa’s side. He was like a man possessed in the centre of the pitch and dominated every ball that came his way.

It was sickening to see him go off injured at the end, but we can only hope it’s nothing too serious. McTominay added drive to our midfield today and there was no room for Paul Pogba to come off the bench.

Ole Gunnar Solskjaer is expected to comment on McTominay’s injury during his post-match press briefings.

Sky Sports gave their man of the match award to McTominay, which was announced after he had left the pitch.

Solskjaer didn’t have any substitutions left when the Scotland international went off the pitch reaching for his groin.

Here’s how United fans reacted to McTominay’s injury on Twitter:

McTominay had 86 minutes to get a hat-trick. We're not allowed to have nice things. #MUFC

Oh no McTominay is hurt and we’re gonna have to play the World Cup winning Pogba more?? #MUFC

Scott McTominay has left the pitch with a groin injury. United will play the remainder with 10.

McTominay has been outstanding.

best player on the pitch my a country mile