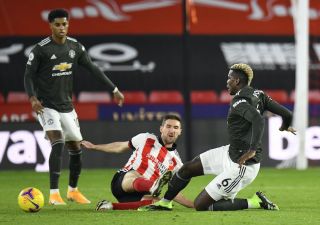 Mino Raiola is reportedly doing all he can to take Paul Pogba back to Juventus.

The Manchester United midfielder returned to Old Trafford four years ago but his agent recently revealed that Pogba is looking to leave the club in the summer.

Pogba has come under criticism from fans and pundits alike after a string of inconsistent performances. His return was built up to kickstart Jose Mourinho’s reign in charge and we all know how that went.

Despite the club deciding the trigger a one-year contract extension in Pogba’s deal, there have been strong whispers to suggest that the Frenchman’s time at United will come to an end in the summer at the latest. A move in January would be very difficult but you won’t find many Reds against the idea midway through the season, if another player can be brought in to improve the team.

Juventus seem to be the frontrunners in the so-called race to sign Pogba, whoever, financial repercussions are going to complicate matters in the transfer window.

According to a recent report in the print edition of Corriere Torino (via Sport Witness), Raiola is trying to sort a deal out between all parties.

United are said to be waiting on signals from Pogba to suggest he wants to leave, but I feel his silence following Raiola’s comments — about him wanting to leave — said more than words possibly could.

I just want to be done with all the Pogba circus malarkey. It does anything but benefit the team and that’s what I care about.

Still hope Pogba scores a screamer to win it against Leeds later today!