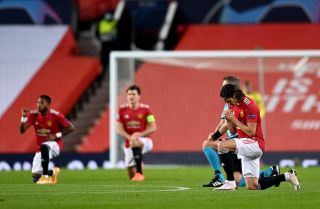 Leeds United come to Old Trafford in the Premier League for the first time since February 2004 and Edinson Cavani is back in the squad.

Cavani, 33, missed United’s last three matches due to a muscle injury but is in line to make his first appearance since being forced off against West Ham two weeks ago.

There’s also a mention for Eric Bailly who increase the matchday squad count to 20, rather than the usual 18, meaning Ole Gunnar Solskjaer’s options are growing.

Solskjaer can name nine substitutes after Premier League clubs voted in favour of expanding benches but teams will be restricted to three substitutes.

Leeds will come to Old Trafford and naively try to attack from the start, but if Solskjaer plays our own counter-attacking game things should be fine.

The sheep have been involved in a number of high-scoring encounters this season.