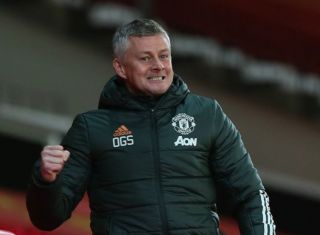 The only disappointment for Manchester United was that there weren’t 75,000 packed inside Old Trafford to see it.

Ole Gunnar Solskjaer’s rampant Reds put their old enemy to the sword and should have inflicted even more damage.

26 shots and 14 on target, this was United at their irrepressible best as Solskjaer had all his key decisions vindicated against a relentless Leeds side that were ultimately asking for punishment.

Scott McTominay was dynamite alongside undroppable Fred in midfield and goalscorer Daniel James was a constant menace for Marcelo Bielsa’s high-pressing full-backs.

It’s no wonder Bielsa has been so desperate to prize James to Elland Road for the last two years.

Solskjaer’s plan to match the Leeds intensity worked perfectly against tireless opposition who afforded acres of space for United to thrive with their ceaseless but naive attacking mindset.  It was the antithesis of Solskjaer’s typical lethargic and impotent United at home.

United have scored six goals in a Premier League game for the first-time since that 8-2 over Arsenal in August 2011.

And few games since have been more watchable on this gloriously bonkers evening in Manchester.