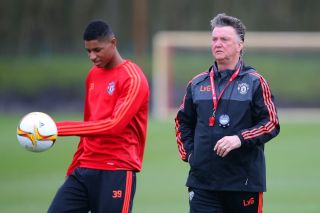 The Dutchman says Rashford could leave United in the future, despite the striker making his desire to end his career at Old Trafford very clear.

Rashford burst onto the scene under Van Gaal in 2016 and has become a mainstay in our attack. As a United fan, the England international said earlier this month that playing for any other club wouldn’t feel right and he hopes to stay put for a ‘long time’.

The thought of Rashford playing for another club has never came into my mind, and I don’t think we’ll see the day until he’s in his 30s at the very least.

“In my mind it wouldn’t sit right for me to be pulling on another shirt. I just want to do my best I can. Hopefully I am here for a long time.”

However, Van Gaal believes Rashford chose his words carefully. He thinks the forward has left the door open to a potential United exit.

Van Gaal said, as per the Mirror: “I admire him for being such an honest and pure guy. He comes from an area where things are tough. And the way he is fighting for less privileged kids is wonderful. He does a lot of stuff for the community. He is a great lad.

“I enjoyed listening to him when he said he hopes to play at United for a long, long time. But I listened carefully. And he did not say he would never play for another club.”

The Dutchman went on to praise Rashford for maturing his game, adding: “When I first saw him, he was an old fashioned dribbler. That is how he played in the reserves.

“He would take people on all the time, go past them with lovely dribbles. And he still loves to do that. But he is now growing asa top player. He knows when he can’t make his dribbles, he needs to pass.

“When he has double markers he needs top come up with quick decisions and different options. I have noticed he is giving more assists for goals, the way he scans the pitch is good.

“He must keep doing that, if he dribbles too much he gets stuck with the ball. When you give him space, he is unstoppable.”

Van Gaal was the manager who gave Rashford his first chance in the first team, so we’re sure Rashy still has the utmost respect for his former manager, even if the feelings aren’t mutual inside the dressing room.

It must make Van Gaal proud seeing the player he is becoming.