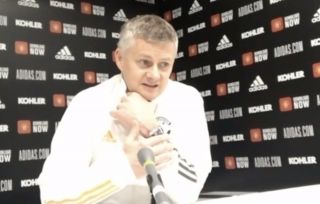 McTominay, 24, joined United’s youth academy all the way back in 2002 and after successfully climbing his way through the Reds’ ranks has now emerged as an important first-team regular.

Since making his senior first-team debut in May 2017, McTominay has featured in 100 matches in all competitions for the Red Devils.

Two opening goals from the 23-year-old in the first three-minutes of the match ensured the tone was very much set as United went on to thrash Marcelo Bielsa’s men 6-2.

The commanding midfielder was in fine form in more or less every aspect of his game; he was physical, commanding and showcased moments of brilliant attacking ability.

Speaking about his side’s emphatic performance, Solskjaer was quick to praise his 23-year-old midfielder as he labelled McTominay a ‘physical monster’ and drew attention to the Scotsman’s work ethic.