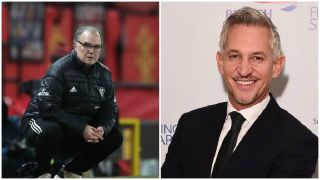 English football has become obsessed with examining Marcelo Bielsa’s style of football as Leeds United manager. Whenever Gary Neville is on commentary for their games we hear how brilliant it is to watch.

There’s no denying that Leeds United have come to the Premier League to entertain. They’re going to play their play regardless of the opposition.

But the biggest thing I took from their defeat at Old Trafford is that their style could cost them along the way in the top-flight. Some managers would get criticised for being so open at the back, or called naive for ignoring basic tactics.

Lineker tweeted: “Leeds are really fun to watch, but they’re even more fun to play against.”

Leeds are really fun to watch, but they’re even more fun to play against.

I wholeheartedly agree with with the Match of the Day host because if Leeds do that every week their status in the top-flight won’t last very long, and I am talking beyond this season.

It’s a decent three points to be guaranteed every season, though.