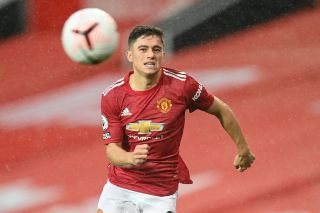 Daniel James has reportedly decided he wants to stay and fight for his place at Manchester United despite being linked with a switch in January.

This is according to the Manchester Evening News, which states that the Wales international doesn’t want to leave Old Trafford amid rumours of a possible move to Leeds United.

James hasn’t played a lot of football lately because there are players ahead of him in the pecking order, despite initially getting off to a flying start to life at the club when he joined from Swansea City last season.

Right now he’s barely getting a look-in under Ole Gunnar Solskjaer, but that could quickly change if there’s injuries or an improvement in James’ game.

Still only 23, James is still developing and Solskjaer knows his pace could prove lethal on a counter-attack. He might even benefit from a loan move to get regular game time, preferably in the Premier League but not at Leeds. Who would want to go there?

Manchester United take on Leeds today at Old Trafford but we would be very surprised to see James involved.