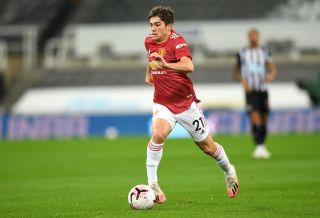 Ole Gunner Solskjaer has named his Manchester United line-up to face Leeds United in the Premier League at Old Trafford.

More than 16 years have passed since a 1-1 draw at Elland Road. That was the last time these two rivals met in the Premier League, but today Leeds United are back on their travels to Old Trafford. Sadly no fans are allowed in for this historic fixture.

Marcelo Bielsa’s newly-promoted side arrive in 13th, seven places and six points behind Manchester United, and today Ole Gunnar Solskjaer’s men will be focused on winning and staking a claim in this season’s Premier League title race.

🚨 Reds, this is how we'll line up at Old Trafford this afternoon 📋

It’s a game we want to see United winning convincingly, like them all I guess, but Leeds will put up a fight and prove to be tricky opponents.

Leeds are one of the clubs constantly linked with moves for Dan James, so it’s interesting to see him get the nod. This is a chance for the Welsh winger to tell the manager he’s ready whenever needed.

There are plenty of goalscoring options on the bench like Mason Greenwood, Edinson Cavani, Paul Pogba and Donny van de Beek.

I fancy a high-scoring contest. What do you think?

Read more: Preview: Solskjaer’s Manchester United must tighten up at the back against Leeds