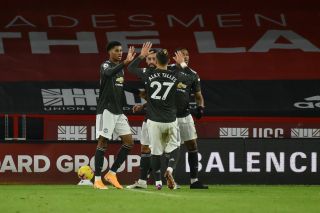 The former Manchester United striker thinks his old club can compete for the Premier League title this season.

Dimitar Berbatov reckons that the Reds are dark horses for this season’s Premier League title.

United are in the process of recovering from a slow start to the 2020-21 campaign. Ole Gunnar Solskjaer’s side sit 7th, eight points behind current leaders Liverpool with two games in hand as things stand.

Next up for United is Leeds at Old Trafford today.

The biggest problem right now is that we’re not taking hold of games, and nor are we starting enough games on the front foot. Solskjaer’s side has come from behind to win all six of their away games so far this term, while at home they have only managed five points from a possible 18.

Berbatov believes United have a great chance to fly under the radar and snatch the Premier League trophy, but they must cut out their mistakes in order to achieve that.

“Everyone connected to the club is, of course, disappointed with being knocked out of the Champions League but that’s in the past now and at the moment things are going well for United inn the Premier League,” the former United striker told Betfair, as cited by GOAL.

“If they win their opening game in hand then they will move even further up the table and in my opinion, they are in a great position to attack the top and go for the title. They are lurking in the shadows at the moment. People aren’t really paying attention to them and aren’t really considering them as a title challengers.

“All the focus is on Liverpool and Spurs, but maybe there will be a few surprises along the way and United will fight for that top spot because it’s a tight race this year.

“They need to correct this habit of conceding a goal first because, when they come up against a really good team, it’s going to be difficult to turn the game around.

“United are doing really well so far in the league and I think they can be happy with how they’ve done so far. The big plus is their game-in-hand against Burnley. No offence to the Clarets but United should be taking three points there, which would be massive.”

More people will be talking about a potential race if United beat Leeds today.