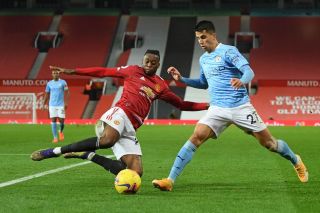 Aaron Wan-Bissaka is reportedly not keen on accepting an offer to represent DR Congo at international level – despite being yet to make an appearance for the England senior team.

The Manchester United full-back is determined to force his way into England’s plans under Gareth Southgate despair serious interest from DR Congo.

Despite an approach to switch allegiance, Wan-Bissaka wants to fight for an England place after representing the Three Lions at youth level, according to the Times.

Wan-Bissaka has become one of the best full-backs in the Premier League since his move to Old Trafford from Selhurst Park. He came through the academy at Crystal Palace and is now seen as one of the best right-backs around from a defensive point of view.

He gets criticised for not offering enough going forward, and faces plenty of competition for a spot at right-back for England.

Trent Alexander-Arnold, Kyle Walker, Kieran Trippier and Reece James are all strong options for Southgate, so you can’t blame DR Congo for changing their arm in getting Wan-Bissaka to play for them instead.

The Times note that although Wan-Bissaka has represented DR Congo at youth level too, he is keen to represent England after being born in Croydon.

Read more: What TV channel is Manchester United vs Leeds United on?