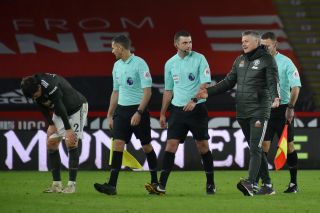 Manchester United welcome old rivals Leeds United back to Old Trafford for the first Premier League clash since between the two sides since 2004.

That’s 16 years since Leeds were in the top flight and we’re excited about tomorrow’s game. The only damper is that Manchester is still in Tier 3 and fans won’t be allowed into Old Trafford for the big game.

United are looking to mount a title challenge this season after crashing out of the Champions League, and we’ve played fewer games than the teams around ahead of us.

Stretty News has rounded up everything you need to know about the match.

Manchester United v Leeds will kick off at 4:30pm on Saturday 20th December 2020.

You can watch the game live on Sky Sports Premier League and Main Event from 4pm. If you are a Sky subscriber, these channels will also be available to stream via Sky Go and NOW TV.

Manchester United are close to a full strength side, with just Marcos Rojo out of this one. Edinson Cavani could make a return after missing recent games with a knock.

Leeds are without centre-back duo Diego Llorente and Robin Koch, which should see Luke Ayling come into the middle to partner captain Liam Cooper again.