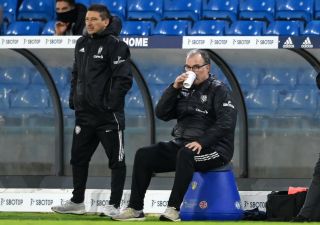 Leeds United manager Marcelo Bielsa has lauded Manchester United’s Ole Gunnar Solskjaer for the Norwegian’s ability to handle the pressure that comes with such a big job.

Bielsa, 65, will probably down as a Leeds legend after guiding them back to the Premier League for the first time in 16 years.

Leeds United’s style of play has been a major topic of conversation since returning to the top flight. Foundations have been built on a resilient defence while the whole team press hard and fast followed by lethal counter-attacks.

Bielsa will be hoping his Leeds side can cause an upset at Old Trafford on Sunday. He’s got more experience than his opposing manager, but Solskjaer has shown in the past that he shouldn’t be underestimated.

Speaking ahead of the match on Sunday, Bielsa addressed the criticism his counter-part often suffers, as per Yorkshire Live. The Argentine coach said: “We are all over-observed and this is a situation where no coach is exempt.

“It increases or decrease depending on the success the team has. It’s part of the job. And of course, Solskjaer has dealt very well with this aspect we have just spoken about.”

Bielsa knows what it’s like to manage a side he’s played for, like he did for Newell Old Boys. He gave his view on whether Solskjaer is getting more time in the United job because of that, saying: “It’s not exactly the same. Solskjaer was a reference for Manchester United. I played two games in the top division.

“Normally, when a player has played for a long time in a team they have the affection of the fans and when they become a manager they have more of their support.”