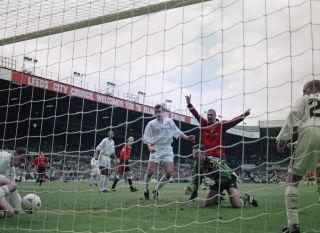 In 2004, Alan Smith scored at Old Trafford to pilfer a point against a Sir Alex side on course for a rare barren season. That summer, Smith would join that very same United side whilst his former club – European semi-finalists three years before – sank into the abyss of English football’s second tier.

It was a truly remarkable, self-inflicted fate for one of English football’s biggest, most iconic names. As the United of Lancashire swept up trophy after trophy at juggernaut pace under the greatest manager who ever lived, their Yorkshire counterparts struggled for their very existence. Relegation to the third tier – an unthinkable and unpalatable demotion – only added to the misery. Leeds, a side feared, revered and reviled throughout Britain at their all-conquering zenith, had gone from playing at Old Trafford, Anfield and Goodison Park to the likes of Tranmere, Hartlepool and Oldham within five years.

It would take a succession of managers, two points deductions and several near misses before this sleeping giant raised its head and began to stir. Not until the arrival of enigmatic maverick Marcelo Bielsa, a manager with the look of a mad scientist-turned-Oxford boffin, did the Elland Road revolution truly take off.

2020 will be remembered as a year like no other and 12 months in which nothing made very little sense. It perhaps seems fitting that, against this backdrop, Leeds United – Yorkshire’s premier football tour de force –  finally returned to the promised land after 16 years. In doing so, one of English football’s most storied rivalries was back on the calendar.

We’ve met Leeds twice since their demotion in 2004, both in cup competitions a year apart, in the FA Cup in 2010 (moving on) and then the League Cup the following season – a 3-0 win for Sir Alex’s side with the Whites then a Championship club. But not for 16 years have these two hated rivals aired their grievances at league level.

An exciting, energetic, breath-of-fresh air Leeds side won the second tier at a canter and have pushed on into the Premier League, catching the eye with their fearlessness and open, expansive style. Whilst they have yet to take a big scalp, they have held City, drawn with Arsenal and pushed Liverpool and Chelsea close, a tantalising glimpse of how Bielsa’s thrill a minute side refuse to settle for simply survival.

On Sunday, these two sides – linked by prefix and history but divided by so much else – lock horns at Old Trafford in a rekindling of a rivalry for the ages. Much like United and Liverpool, it’s an enmity and mutual loathing steeped in history and tradition – not just between two football clubs but between two warring cities or, in this case, an entire country. This is a feud that transcends football and goes back centuries to the annals.

The whole “War of the Roses” saga still bears relevance, centuries after the red of Lancashire emerged victorious over their white rose counterparts in the House of York from across the border. I don’t pretend to know the bitters ins and outs, but it gives you an idea of the rivalry between the two counties – one that neither of the two combatants have even quite been allowed to forget.

Throw in the fact that Johnny Giles – the Irishman who broke through at Old Trafford became a legend for Don Revie’s all conquering tour de force. The scrap for major honours would often be a straight fight – the latter being the operative word, sometimes literally – between the two men and their starkly contrasting styles.

Revie’s men were unable to back up their domestic pre-eminence with the European Cup, losing in two finals, whilst of course Busby’s side went on to become to first English side to win it – an achievement that irked the widely-reviled Leeds manager and only adding to the intensity between the clubs and their cities. United had stolen their thunder and they hated us for it.

Yet despite the rivalry, the teams have provided a list of men to play for both – Giles, Joe Jordan, Gordon McQueen, Denis Irwin, Gordon Strachan, Eric Cantona, Rio Ferdinand and Smith the most notable. Leeds had an exciting young team at the time Sir Alex’s emerging side was reaching its peak, and the subsequent financial meltdown and firesale following that 2004 relegation led to their spectacular demise and a sense of deep-rooted jealousy.

There have been inflammatory banners, Munich songs, violence, disorder and reference to the Leeds fans killed in Galatasaray in a European tie. There is no love lost between the two sides or the two sets of fans, and – although I grew up in an era where Leeds were a fading force – I’m looking forward to us playing them again.

It is a crying shame that no fans will be present at Old Trafford and these two old foes renew hostilities on Sunday and rekindle one of the English game’s lost rivalries. For all the mocking and revelling in the fall from grace of the once mighty Leeds, it’s great to have them in our wing mirror again for the first time in almost two decades.

Whilst those two cup games in the mid 00s lit the blue touch-paper, the two sides are now on an equal footing in the top flight. There’s no Sir Alex, no Sir Matt and no Don Revie. The men who made who this fixture what it is may have long ridden off into the sunset, but the Leeds fire is well and truly burning again. This time, it will take some dousing.