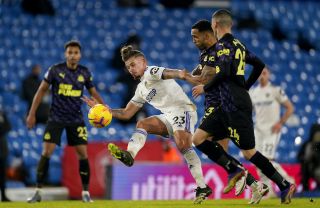 Kalvin Phillips is going to be sending a powerful message when he takes to the Old Trafford pitch for Leeds United on Sunday.

The defensive midfielder has designed some special boots with Shaka Hislop for the Show Racism the Red Card campaign and he hopes it will help educate people about a subject close to his heart.

Talking to the BBC on Friday, Philips said: “I got them [boots] edited by Show Racism the Red Card, the charity that I’ve seen a lot of and I’ve seen others wearing the boots.

“It’s a decision I wanted to male because of what’s been going on recently.

“I’m a black man from a black family, some of the stuff that’s been going on has been sad and I just wanted to put my opinion out there and show people who maybe don’t know who I am to educate them and to swerve them towards the campaign that will be written on the side of my boots.

“It’s just to educate as many people as possible.”

Leeds have brought their style to the Premier League and are a very entertaining side to watch.

The Reds will be up against it on Sunday but our counter-attacking football should hurt the Sheep, especially with Edinson Cavani set to return and Marcus Rashford finding his best form during the week versus Sheffield United.