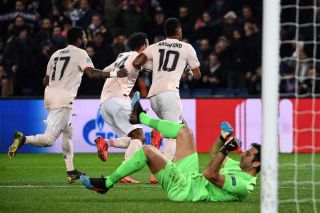 Gianluigi Buffon has admitted that Manchester United’s famous comeback against Paris Saint-Germain in the 2019-20 Champions League last 16 is a match which he still thinks about ‘at least three or four times a week’.

The Reds won the tie over two legs with a 3-3 aggregate scoreline — but it was a 3-1 win in Paris that followed on from a crushing 2-0 defeat at home. A remarkable comeback saw Ole Gunnar Solskjaer’s side progress in the Champions League on away goals.

Reminiscing about the match which will go down in both club’s history for two very different reasons, legendary goalkeeper Buffon, admitted that game still plays on his mind.

Speaking exclusively to Marca, the world-class keeper said: “I was sure that this season we would have reached the final, of that I was sure.

“In Manchester we won a huge game -2-0 with goals from Kimpembe and Mbappe] with a great show of force. Unfortunately I blame myself for an incredible mistake.

“A mistake that, with the experience I had, I should not have made.

“We thought it was a formality and I got carried away. It was as if that match was of little value because we had already won 2-0 in the first leg and they, the poor, had two players available and nine young people.”

Buffon has since returned to Juventus where he hopes he can win the Champions League before retiring. Aged 42, everyone knows retirement isn’t far away so it will be intriguing to see if Juve can go all the way this year with Cristiano Ronaldo leading their strike force.

It’s a shame we weren’t able to inflict more pain on PSG in the group stages of the competition this term. Instead we crashed out and have the Europa League to look forward to in the new year.