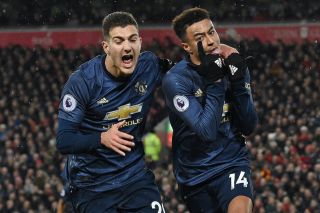 Lingard, 28, has been with United since he joined the Reds’ youth academy all the way back in 2000.

After climbing the club’s youth ranks, Lingard went on to force his way into the Reds’ first-team plans before making his senior debut in 2016.

Despite making over 200 appearances for United in all competitions, Lingard’s time at Old Trafford seems all but over after the midfielder fell out-of-favour with Ole Gunnar Solskjaer.

Lingard has struggled for game-time in recent months and has only managed to feature in just two EFL Cup fixtures this season.

With his contract set to expire next summer, the 28-year-old’s long-term future has been subject to much speculation.

However, it is expected that the club will trigger an optional one-year extension to avoid losing the attacking midfielder on a free transfer.

According to a recent report from MEN, Lingard has emerged as a shock target for Sheffield United who, coincidently, were beaten 2-3 by the Reds during Thursday’s Premier League clash at Bramall Lane.

MEN’s report claims that the Blades would be looking to loan Lingard and would be expected to cough up the majority of his £100,000-per week wages.