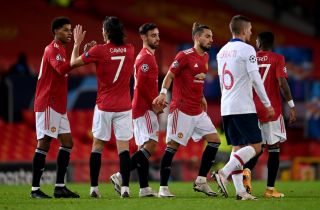 Manchester United manager Ole Gunnar Solskjaer has hinted that star striker Edinson Cavani will be fit and ready to face-off against Leeds United when the two rivals clash on Sunday in the Premier League.

Cavani, 33, joined United during the summer transfer window’s deadline day on a free transfer after his contract with Paris-Saint Germain expired earlier this year. The transfer was confirmed on the club’s official website ManUtd.com.

Since his arrival in Manchester, the elite South American marksman has featured in 10 matches in all competitions and has been directly involved in four goals, including a stunning brace against Southampton.

After suffering a recent knock, Solskjaer has been forced to set his sides up without his prolific Uruguayan.

However, speaking ahead of the Reds’ mouth-watering domestic clash against Marcelo Bielsa’s exciting Leeds United on Sunday, Solskjaer has given fans a major boost after admitting that he expects Cavani to fit and available to feature.

“Edinson [Cavani] will be available, I think, yeah,” Solskjaer told the club’s media. “He trained this morning so he should be available for the Leeds game.

“I don’t think we lost anyone [during the win over Sheffield United]. When you win games, the boys never feel the little knocks and bruises too badly.”

United come into Sunday’s match five-points off league leaders and arch-rivals Liverpool and with the Red Devils having a game in-hand too, Solskjaer will be desperate to close that gap even further.

Elsewhere, Leeds United will undoubtedly be looking to continue their impressive form after being back in England’s top-flight for the first time in 16-years.