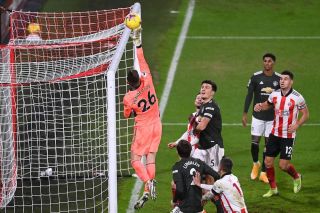 The goalkeeper let himself down early on as United conceded after just five minutes. He took one touch too many inside his own six-yard box, only to be dispossessed with David McGoldrick taking the lead for the Blades.

United still went on to win the game 3-2 but Henderson still mentioned it in his post-match Instagram upload. He came straight out after the game and thanked his team-mates for coming back to win the game, and ensure his mistake wasn’t all over the headlines this morning.

Henderson produced a high quality save at the end of the match to rescue three points for the Reds.

However, in the lead up to Henderson’s mistake which cost us a goal early on, Maguire was also at fault for not getting the ball away quick enough.

Many Reds have complained about how United play out from the back despite not being very good at it.