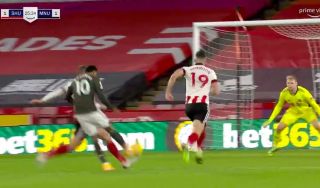 The Reds fell behind in embarrassing fashion as returning goalkeeper Dean Henderson’s howler allowed David McGoldrick to open the scoring.

United have been far from at their best against Chris Wilder’s relegation-threatened side and the propensity to start slow is increasingly frustrating for supporters.

But Ole Gunnar Solskjaer’s side have found an equaliser midway through the first-half through Rashford.

Rashford was found easily over the top by Victor Lindelof and took the ball in his stride and smashed the ball past Aaron Ramsdale.

Solskjaer will hope the goal can kickstart a positive United performance as the Reds chase their tenth consecutive away Premier League victory.