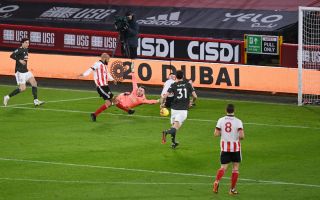 The Reds are one goal behind against Sheffield United thanks to a goal by David McGoldrick.

On the night Dean Henderson got the nod against the side he spent two seasons with on loan, the United keeper committed an awful mistake but that doesn’t excuse why the defenders in front of him didn’t get rid of the ball quicker.

The Blades were always going to press us from the start and it won’t be long before they start parking the bus, though that is not how Chris Wilder’s side played last season.

Check out the goal below, via Amazon Prime:

It's a nightmare return to Bramall Lane for Dean Henderson, which sees Man Utd trail away from home again 😩#PLonPrime #SHUMUN pic.twitter.com/mbJdMZM41p