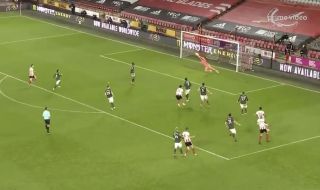 Dean Henderson needed a big save after his first-half howler.

The young Manchester United goalkeeper conceded an awful goal early in the game, but made amends late on with an important save to keep the Reds in the lead.

It would have been a shame if that was Henderson’s only highlight of the night.

But Sheffield scored two lucky goals on a quiet night for Henderson between the sticks.

He was alert at the right time as we approached the final minutes of the match to deny the Blades a third goal and equaliser!

Check out the save below, footage courtesy of Amazon Prime:

HUGE save from Dean Henderson!@ManUtd's goalkeeper makes up for his earlier error with a vital stop in injury-time 🧤#PLonPrime #SHUMUN pic.twitter.com/P7iioONh5U

Henderson could be in with a chance of starting against Leeds United this weekend.