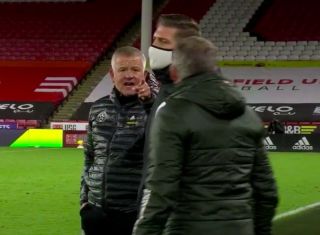 Things got heated between Ole Gunnar Solskjaer and Chris Wilder in the grandstand finish between Manchester United and Sheffield United at Bramall Lane.

United appeared to be cruising to a comfortable victory at 3-1 but David McGoldrick’s late goal halved the Blades’ deficit and caused a nervous final few moments for all involved.

Then, in the 93rd minute, Chelsea loanee Ethan Ampadu fouled Marcus Rashford which sparked a tense exchange of words on the touchline.

The fourth official was forced to calm down the pair who both showed their passion in the final stages.

At full-time, Solskjaer and Wilder shook hands proving there was no bad blood after the incident.

United have made it 10 away wins in a row in the league while Wider’s men are still searching for their first victory of the season.

See the incident below. Footage courtesy of Amazon Prime Sport.

It's getting heated on the touchline 😤