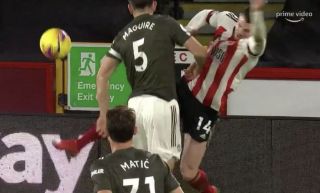 The game got off to a fierce start after a Dean Henderson clanger allowed forward David McGoldrick with the perfect oppotuntity to open the scoring – Which he gladly took.

It didn’t United too long to claw the game back after Victor Lindelof played a beautiful long-range over-the-top ball through to team-mate Marcus Rashford who lashed it home.

Soon after Anthony Martial went on to make it 2-1 to United.

However, prior to United’s revival, the Reds’ captain was spotted engaging in a physical battle with the Blades’ front-line.