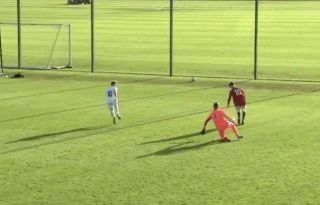 Neil Ryan’s Manchester United side are on top of the table and they currently lead Leeds United 3-0, thanks to two goals from Charlie McNeill (x2) and Charlie Savage with the third.

The first goal came early in the second half when the Reds were awarded a penalty kick. McNeill stood up and showed real nerve to successfully pull off a panenka!

All three goals are available to watch below, courtesy of MUTV.

United’s second goal, another from McNeill, was superb again from the young centre-forward. A brilliant long ball found McNeill who showed great composure to round the goalkeeper and last man back – before dinking it into the back of the net.

A third goal was a matter of Savage being the in the right place at the right time, but ultimately a tidy finish from the youngster.

Another win in the bag for Ryan’s kids.

McNeill rounds the Leeds U18 goalkeeper