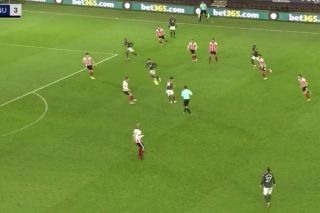 Manchester United are in cruise control against Sheffield United.

Currently leading the Blades 3-1, Manchester United look set to get another win on their travels in the Premier League.

Marcus Rashford has been the standout performer with two goals and it’s the best performance he’s had this season.

However, Bruno Fernandes is still operating in behind and pulling the strings in the final third.

The Portuguese star played a delightful chipped pass into the box but Aaron Wan-Bissaka was unable to control it.

Check out the video below, footage courtesy of Amazon Prime:

It’s important United keep up the pressure and try to add to their goal difference for the Premier League season. We won’t have many opportunities to do it like tonight because the Blades are really poor at the back.