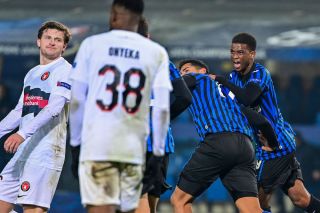 Ole Gunnar Solskjaer admits he is unsure whether Amad Diallo will go straight into Manchester United’s first team when he joins up with his new team-mates in January.

The 18-year-old was signed by United in a £37.2m deal on deadline day, as per Sky Sports, but a decision was made to allow the winger to remain at Atalanta while the Reds try to sort out his work permit.

Diallo has been limited to just 35 minutes on the pitch for Atalanta’s first team this season — across two substitute appearances — and Solskjaer claims the winger may follow the same path as Facundo Pellistri, who also joined on deadline day.

Pellistri has trained with Solskjaer’s first-team squad but has yet to make a first team debut. A decision was made at Carrington to give the Uruguayan minutes for the Under-23s to help him adapt his style of play to the English game and he’s been very good.

‘We felt Facundo would benefit,’ Solskjaer told the press, as per Metro.

‘He started training with the first team — he did well but we couldn’t give him game-time so we thought we’d give him a run of games in the [Under] 23s and he’s benefit from that.

‘His confidence has been given a boost. He’s shown in all the games that he can impact the game.

‘They’re both talented players that we believe will have a long career here. It’s important we find the right time.’

Read more: Bad news for United fans as Greater Manchester is expected to remain in Tier 3