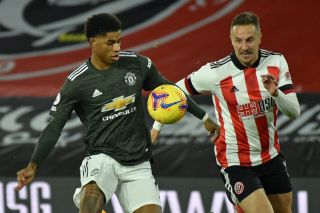 Manchester United moved up to sixth in the Premier League with victory at bottom club Sheffield United despite falling behind after only two minutes.

A Dean Henderson error against his old side gave the winless Blades a surprise lead but the Reds turned the tie on its head through Anthony Martial and a virtuoso Marcus Rashford performance. United had to do things the hard way and were made to work for the win, but held on for a tenth successive away victory to move to within one point of the top four.

Improbably, despite a barrage of criticism, constant questions and wildly fluctuating fortunes, United will go second in the league should we win our game in hand at struggling Lancashire neighbours Turf Moor.

This was a game that lapsed into a familiar pattern – a sloppy, slow starting United side left chasing the game against opponents whom caught them cold and dealt an early blow. Again, the Reds fell behind early on, through ex-Red Henderson’s error, but averted a major shock against a side still searching for their first win, thanks to their firepower in attack.  The Reds have managed to recover four times now, against Everton, Saints, West Ham and now Sheffield, but cannot keep giving up one goal head starts. Eventually it will cost us. It seems crazy to think that United could be second if we win our game in hand, despite their reputation as a patchy team that plays in bursts. It is almost as if we need the extra challenge of life on a tightrope to inspire us. The Reds kept things nice and tight in the derby on Sunday, but we reverted to type in typical harum scarum fashion. Why don’t we just come out for every game with a one-goal deficit?

The stage seemed perfectly set for the Reds to take full advantage of their rivals slip up on a Thursday night under the lights at a deserted Bramall Lane. The chasing pack stumbled, as Manchester City, Chelsea, Spurs and Leicester all failed to win, but this is a United side notoriously poor at failing to capitalise. Even against a Sheffield United side at the foot of the table and with a solitary point, this looked a far from certain shoo-in. United, as is their wont, made life hard for themselves but succeeded where those before them had failed, albeit in a manner far less comfortable than it should have been. Mixed in with some excellent build up play and eye-catching free flowing football was the usual suspect defending, particularly from set pieces, and some carelessness on the ball, but a win is a win as the Reds went sixth, five points off top stop with a game in hand, a trip to east Lancashire rivals and struggling neighbours Burnley. The old adage tells us that, if you can get yourselves in the mix at Christmas, you’re in with a fighting chance. This is a side with frightening potential that is a few top quality centre halves short of a genuine challenge for the title.

This was a game again lit up by pockets of individual brilliance. Paul Pogba defied his critics with a dominant midfield showing, fellow Frenchman Anthony Martial came to the party and Marcus Rashford continued his superb season in front of goal. Nip and tuck with Bruno in the race for United’s Golden Boot, Rashford hit the front of our scoring charts with two excellent individual goals. First he killed Pogba’s blistering through ball on his instep and blasted the ball beyond Aaron Ramsdale, and then he finished off a trademark lightning quick counter to move on to twelve for the season, one ahead of the Portuguese. This young man has enjoyed a stellar season, he’s scoring all types of goals and is coming of age as a Manchester United player. We may only be a third of the way through the campaign, but Rashford is already a contender for our Player of the Year. Dovetailing beautifully with Paul Pogba and the string-pulling Bruno Fernandes behind him, Rashford will get close to the 25-goal mark if he stays fit and keeps this form going. Goal-getter, an MBE, life changer extraordinaire… is there anything this man can’t do?

One response to “Sheffield Utd 2-3 Manchester United: Three things we learned as Rashford comes of age”