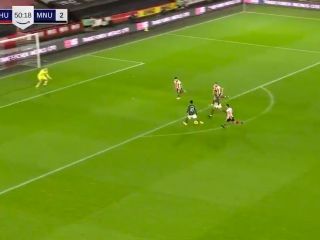 Manchester United have made it 3-1 against Sheffield United after a devastating counter-attack was finished off by Marcus Rashford.

Paul Pogba brilliantly spun inside his own-half before finding Bruno Fernandes who flicked onto Mason Greenwood.

Greenwood was felled in midfield but referee Michael Oliver played a superb advantage and United broke at pace.

Fernandes found Martial who looked to cut inside and shoot with his left but Rashford took control to slot past Aaron Ramsdale – who should have done better to keep out the shot.

Rashford had scored an emphatic equaliser after a nightmare start for the Reds at Bramall Lane.

Ole Gunnar Solskjaer’s side now look rampant and are threatening to inflict further damage on the Blades in the final stages.