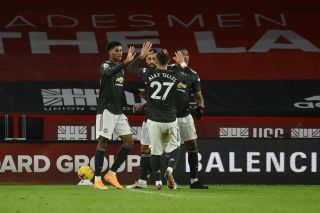 Propensity to false-start doesn’t cost United in the league; they are now the first team in Premier League history to win six away games after falling behind in a single season.

The first of six games in 16 days managed, despite some adversity at Bramall Lane.

But, what was leaning towards a pleasant procession was disrupted by David McGoldrick for a second time as the Blades halved United’s deficit late on.

Instead, it was hearts in mouths as an onslaught tested United’s late resolve. The Reds did enough to move up to sixth in the league, five points from Liverpool’s summit.

Before that, electric Marcus Rashford was at his dazzling best and a sight to behold at full flow.

He emphatically smashed home an equaliser before Anthony Martial prodded in for United to take the lead.

The man-of-the-moment then netted effectively the winner early in the second-half after touches from each of the bright quintet including Paul Pogba, Bruno Fernandes, Mason Greenwood and Anthony Martial.

The Reds have won their tenth away game in a row in the league and ultimately got what they deserved in South Yorkshire.