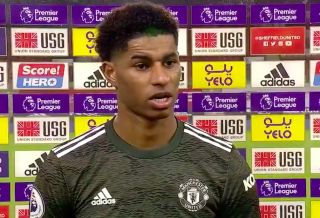 Manchester United moved within five points of the Premier League summit with victory over Sheffield United at Bramall Lane.

Man-of-the-match Marcus Rashford was at his dazzling best, scoring two goals in United’s tenth consecutive away victory in the league.

The Reds are now the first team to come from behind to win six Premier League games in a single season.

Propensity to start slow is not costing United on the road in the league and they are suddenly within touching distance of top spot.

Ole Gunnar Solskjaer’s side also have a game in hand against Burnley – the date of which is still yet to be confirmed.

Unsurprisingly, another away victory in the league has prompted suggestions from some sections of the fanbase that as title challenge could be possible under Solskjaer this season.

We would urge caution on that front as United are still fraught with inconsistency and defensive vulnerability.

While United’s away form is title-winning, their form at Old Trafford most certainty isn’t.

Rashford was inevitably asked about the possibility of a title challenge at full-time and predictably wasn’t drawn in on the subject.

The England international instead stressed the season is still very much in its infancy and emphasised the importance of improving results at Old Trafford.

Listen to Rashford post-match below, via Amazon Prime Sport:

"There's a lot of football to be played" 👀@MarcusRashford chats to @gabrielclarke05 about whether Man Utd are title contenders 🏆#PLonPrime #SHUMUN pic.twitter.com/9UXikp8HHI