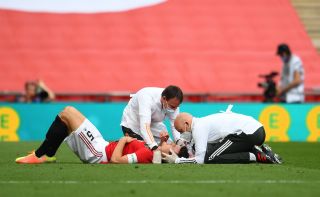 The Premier League has announced that they will bring special concussion substitutes into force from January.

Head injuries have been a hot topic in recent years, with new protocols being put into place to ensure that players do not continue to play on with concussion.

I see this as a necessary intervention from the powers above because more needs to be done to protect footballers from head injuries. They may current be part of the game, but that doesn’t mean work can’t be done to amend some of football’s biggest problems.

The BBC broke the news that trials of extra substitutes for teams who have a player with a suspected concussion will be in use from January. And on top of that, opposition teams will be able to make a change at the same time.

Premier League increase number of subs on bench from seven to nine – but number to be used remains at three. BUT, option for two concussion subs per team – if used opposition can make the same number.

Something had to be done about the reluctance that exists to withdraw players with a concussion, so this should be seen as a step in the right direction.

Meanwhile, Premier League clubs rejected a reintroduction of five substitutes per match at a shareholders’ meeting on Thursday. This is the third time the proposal has been rejected.