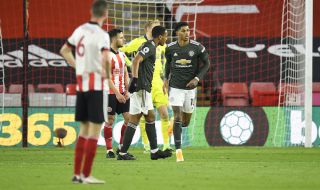 The Red Devils are the in-form team in the Premier League currently with four wins and a draw against Manchester City in their last five games.

Ole Gunnar Solskjaer’s side also set a new record with the victory over the Blades’ becoming to first ever side to score two goals in ten consecutive away games in the Premier League. The Red Devils held on for a hard fought 3-2 victory over the rock bottom Blades’ who are still searching for their first win of the season after playing 13 games. The Blades’ are suffering from the infamous second season syndrome this term sitting bottom of the league. Wilder’s men have lost 11/12 games so far this season only scoring a meagre five goals in the Premier League so far.

Ole Gunnar Solskjaer made four changes to the starting XI from Saturday night’s dismal draw against the “noisy neighbours” Manchester City. The Norwegian deployed his effective 4-2-3-1 system for the trip across the Pennines with some notable changes from the starting line-up. Dean Henderson started ahead of David de Gea on his return to his old side where he spent two successful years on loan under Chris Wilder. Henderson has pushed De Gea for a starting berth in recent weeks with his displays in training impressing Solskjaer and his coaching staff. Meanwhile, De Gea has been in and out of form this season conceding 24 goals in 15 appearances and only keeping four clean sheets so far. Alex Telles replaced Luke Shaw at left back as Solskjaer rotated his squad with the English man only returning recently from a hamstring injury. Nemanja Matic returned to the side to partner Paul Pogba in a double pivot, it was the first time they have played together since the 6-1 drubbing against Spurs earlier this season. Meanwhile, Anthony Martial spear headed the attack after recovering from a slight knock. The starting XI for Manchester United: (De Gea, Wan-Bissaka, Lindelof, Maguire, Telles, Matic, Pogba, Greenwood, Bruno Fernandes, Rashford, Martial).

Dean Henderson’s return to South Yorkshire turned into a nightmare on the 5th minute when the keeper’ took a heavy touch from a pass back from Harry Maguire. The lively Oliver Burke closed down Henderson quickly which resulted in the ball falling kindly to the unmarked McGoldrick, who slotted home to make it 1-0 to the Blades’. Manchester United conceding the first goal has become a reoccurring theme of the season for Solskjaer’s side and it was the sixth successive game United have fallen behind in the first half. United grew into the first half and drew level on the 26th minute. Victor Lindelof played a long ball from inside his own half which was controlled and finished expertly by Marcus Rasford past Blades’ keeper Ramsdale. Rashford has started this season in excellent form with an impressive return of 12 goals in 20 appearances already. The game was only level for 7 minutes before the excellent Paul Pogba released Anthony Martial with an exquisite pass that Martial got to before the rushing Aaron Ramsdale. The ball took a lucky bounce for United which took the Sheffield United keeper’ out of position to leave Martial with an open net to make it 2-1 United. The Red Devils dictated the rest of the first half and should have increased their lead before the break.

Ole Gunnar Solskjaer’s side started the second half brightly creating numerous chances to put the game to bed. United extended their lead in the 51st minute thanks to a goalkeeper howler from Blades’ keeper Ramsdale. The exceptional Paul Pogba won possession in midfield before beating three players to find Mason Greenwood who slotted in Martial. The French man’s misplaced pass fell kindly to Marcus Rashford whose low shot from outside the box went under the body of Ramsdale to make it 3-1. Manchester United were in full control of the game with Bruno Fernandes, Marcus Rashford and Paul Pogba causing havoc for Chris Wilder’s Sheffield side. Aaron Ramsdale kept the Blades’ in the game with a number of important saves to deny Martial and Rashford. Sheffield United grew into the game after the introduction of Rhian Brewster and Mousset. The Blades’ set up a nervy finish to game for United when in the 87th minute McGoldrick scored his second fortuitous goal of the night with a header from a corner. Victor Lindelof’s header ricocheted of McGoldrick past the hapless Dean Henderson in the United goals. Dean Henderson redeemed himself for his earlier error in the 91st minute when he made a terrific save from a thundering volley from Mousset to give United a deserved victory at Bramall Lane.

It was an extremely important victory for Ole Gunnar Solskjaer’s United side after the disappointing performance against City last time out. The victory over Sheffield United moved the Red Devils up to sixth in the Premier League on 23 points from 12 games with a game in hand on all of their top-four rivals. If United win their game in hand against Burnley they will only be two points behind Champions Liverpool who are currently top of the Premier League. United and Solskjaer are starting to find some consistency in the Premier League and will hope to continue to move up to league with a victory of the old arch rivals Leeds United on Sunday at the Theatre of Dreams.