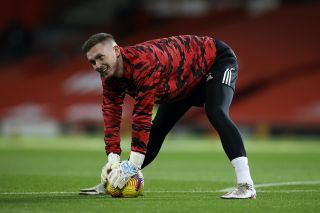 Sheffield United host Manchester United in the Premier League tonight. Victory for the Reds could see Ole Gunnar Solskjaer’s side take another step climbing up the table after a slow start.

Solskjaer has named his line-up to take on the Blades tonight and Dean Henderson will start against his the club he spent two seasons with on loan.

Chris Wilder is under severe pressure as things stand with Sheffield United in the relegation zone. That’s quite a drop in form after what they showed as a newly-promoted side last season.

They will be there for the taking tonight and United could do with adding to their goal difference.

Check out the teams below, via both clubs’ official Twitter accounts:

😤 Another big away day awaits… here's your United XI 👇

Alex Telles comes in at left-back to offer some width down the left flank. His crossing ability should be enough to convince Marcus Rashford, Anthony Martial or Mason Greenwood to find space inside the box.

David de Gea is named on the bench along with Donny van de Beek, Luke Shaw, Fred and Scott McTominay.

We really need to be winning in order to take advantage of the teams around us dropping points. A good Christmas period and we’ll be up near the top of the table.

The match is available on Amazon Prime – find out how to watch it FREE here.

Read more: Preview: Manchester United to exploit leaks at the back away to Blades