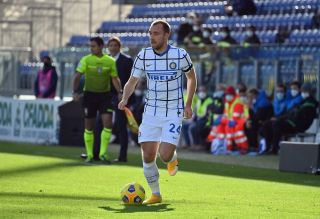 Christian Eriksen is not interested in joining Manchester United in January because he sees a return to the Premier League as ‘an admission of failure and a step backwards for his career’, according to reports.

It’s not a headline that will cause a loss of sleep in Manchester, but it’s noted that the former Tottenham Hotspur playmaker favours a move to Inter Milan after ultimately flopping at Inter Milan.

I don’t see why United would have any interest in Eriksen right now. He left Spurs after spending a number of impressive years in the Premier League, but has failed to reach those individual heights under Antonio Conte.

The Daily Star outlines: “While United could offer him an escape route, sources close to Eriksen claim he doesn’t want to return to England ‘with his tail between his legs.’”

Like I said, nobody will be losing sleep over Eriksen snubbing United because he hasn’t had the opportunity to.

Why on earth would Ole Gunnar Solskjaer want him now?

It’s hardly the most appealing of transfers right now.