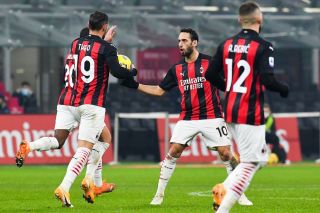 Manchester United have been heavily linked with a move to sign AC Milan midfielder Hakan Calhanoglu, so we’ve been keeping track of reports in Italy even though a genuine transfer pursuit never seemed likely.

There had been reports from multiple sources that Gordon Stipic, Calhanoglu’s agent, was due in Italy today to meet AC Milan chiefs to discuss the potential contract renewal of his client.

The Mirror have gone as far to label this news as ‘a blow’ to Manchester United for missing out on the potential signing.

Italian reporter Daniele Longo claims the meeting between Calhanoglu’s agent and the club was constructive regarding a new deal.

The midfielder’s contract is set to expire next June and Milan are working to reach an agreement, so there’s nothing really to report from a Manchester United perspective bar the fact an unlikely transfer target is set to stay at his current club.

Moreover, MilanNews back up claims there was a constructive discussion between the parties which will be followed by other meetings.

The meeting with Paolo Maldini and Ricky Massara today is said to have lasted four hours.